Over the last few days, our social media feed and news outlets have been preoccupied with the controversy arising out of 20-year old Gurmehar Kaur’s picture where she is seen holding up a placard that reads, “I am a student from Delhi University. I am not afraid of ABVP. I am not alone. Every student of India is with me. #StudentsAgainstABVP”. 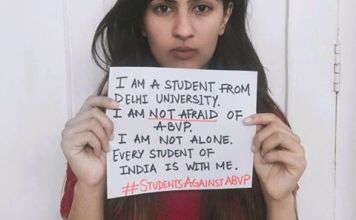 This was in reaction to the recent clashes between members of the RSS affiliated, ABVP, and another set of students in Delhi University’s Ramjas College in North Campus last week. While this post attracted attention towards her, what really shone the spotlight on her was a video that was made last year where she is seen holding placards endorsing peace between India and Pakistan. What drew the ire of many was one particular placard which read: Pakistan did not kill my dad, war killed him. 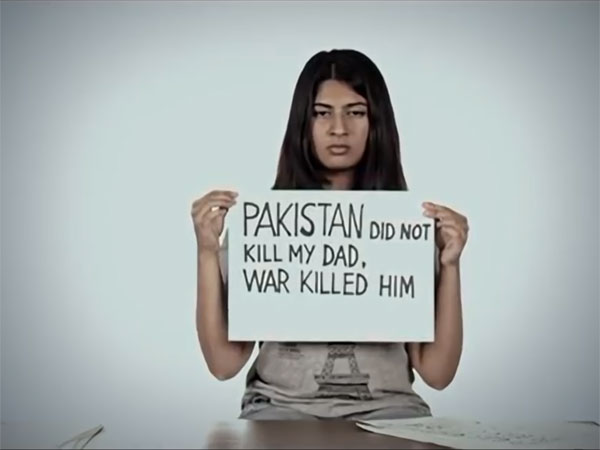 The placard that brought a storm.

This placard is one among the many she holds up during the 4.23-minute video where we learn about her own prejudices and how her mother helped her overcome them.

Due to the uneasy relations between India and Pakistan, many people took to social media to blast her, accusing her of disrespecting her father, Captain Mandeep Singh, who died in the Kargil War. Some even went on to mock/imitate the video including former Indian cricketing great Virender Sehwag who posted a picture with a placard saying: I didn’t score two triple centuries, my bat did.

Others such as Arunachal West MP and Union Minister of State for Home Affairs Kiren Rijiju weighed in on the matter asking: Who’s polluting this young girl’s mind?

In all of this there have been many opinions that have been voiced by people across various spectra. Predictably, those in the right have slammed her while some have even said that Rijiju’s statement is sexist; that he made the statement because Kaur is a woman and such questions arise out of ingrained misogyny that propagates the idea that a woman is incapable of independent thought. I would like to address this quickly before moving on to a larger issue.

I personally disagree that the minister made that remark because Kaur is a woman. Considering his recent form over the past year from saying that people in the country have developed a habit of questioning everything (as if that’s somehow wrong) to his recent conversion comments, it was only expected that he would say what he did. In fact, I would have been surprised if he hadn’t made such a statement. I personally believe that he would have made a sweeping statement like that even if it was a man who had said it.

Now, moving on to the subject of how people have reacted to that placard. The entire issue exists because people are shaped by their experiences, what they consume from the media and often by jumping into conclusions without seeing the bigger picture.

Amongst the many who have slammed her, there may be some who are themselves relatives of war veterans and martyrs and therefore feel a sense of betrayal when they see someone, who in any other circumstance would have been considered one of their own, disregarding the memory of the slain.

To those people, I respect and empathise with your loss but must admit that I will never truly understand the loss you have suffered. It is in the same manner that I will not understand how Kaur can take the stand she has. I suppose different people react differently to the same situation. But it isn’t as if she did not harbour hate too.

If one watches the video in its entirety, you will see that she admits that as a child she hated Muslims because she thought all Muslims were Pakistanis- the subject of her hate- and who she blamed for her father’s death. She also once tried to stab a burkha-clad woman when she was six years old “because for some strange reason” she thought the woman was responsible for her growing up without a father. It was at that moment when her mother explained to her that Pakistan did not kill her father, war did.

Any sensible person with an iota of common sense who can think logically should be able to deduce that her message here is to tell people to resist war instead of going to war. For millions of Indians,  Pakistan may be the enemy but why is that? Is it not because we see them as such and they see us as enemies too? Will the world be a worse or a better place if relations between the two countries improved?

I ask these questions not disregarding the realpolitik of our current world but from Kaur’s perspective as someone who has suffered the loss of a parent and realises that soldiers across the globe follow orders given by people living miles away from the real danger of bullets and those who are more concerned with ballots.

Unfortunately, so many of us are unable to see beyond the immediate and the now. We see one image, fixate upon it and form our opinions from it. Voicing a world-view is not wrong; threatening rape is.

To all those criticising her and questioning her patriotism, I ask, what is so wrong with wanting peace? Is it so wrong to want better relations with our neighbours and expect the same from everyone? Wouldn’t the world actually be a better place if we lived in a world without wars? Is it a fallacy to believe in such an ideal world? Perhaps, so. But just because we do not live in an ideal world does not mean we should not strive towards one.

Then again, my idea of an ideal world will differ from yours. At least let’s talk about it.

PS: As for Virender Sehwag and actor Randeep Hooda’s comments- their juvenile behaviour is not even worth talking about.