For four days and nights, from September 24 to 27, twenty-eight musicians spanning across various genres came together for this year’s edition of the Ziro Music festival (ZFM) in the picturesque Ziro Valley in India’s remote north-eastern state of Arunachal Pradesh. In four years the festival has grown exponentially and played host to scores of artists.

While music is still seen by many as a leisure activity, musicians across the globe are using their craft to bring about changes. In fact, this year there were a few musicians who made their festival debut at the festival, and used their songs to promote ideas of peace and change.
Yangon-based punk rockers Side Effect, who performed in India for the first time at this year’s festival, sing about politics and social issues that most in Myanmar are afraid to speak about or against.
Lead singer Darko C, sporting a pair of Ray Bans on the morning of the final day of the festival, said with a tinge of frustration that young people in Myanmar don’t care enough to talk about politics; but he hopes it will change. 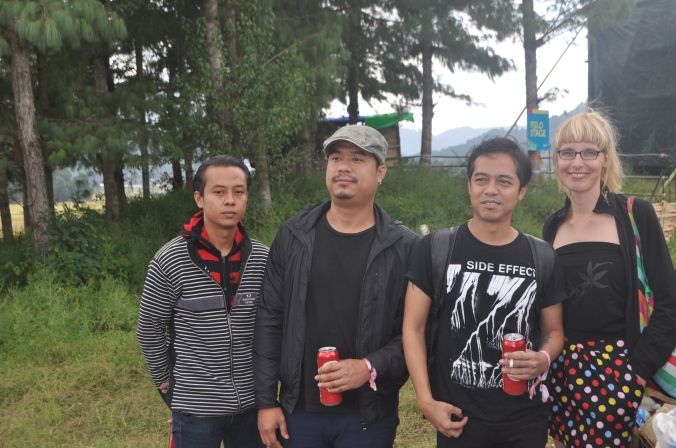 Beer for breakfast. Myanmar’s Side Effect think its important to sing about politics.

“If we want to see changes then we must bring those changes ourselves,” he told me, gulping down Kingfisher Strong beer at 11 in the morning.
We spoke extensively about music censorship and how it has been relaxed a little recently thanks to “reforms” in the Myanmar government; but Darko reminded me that the more things change the more they remain the same.
For example, their song ‘The Change’ speaks about the apparent shift to democracy from the military junta that happened in 2011-12, with lyrics such as: Is it time to change, the change we always wanted? Kind of hard to believe that; you know should wake up now.
Their song ‘Meikhtila’ is another example of a socio-politically charged song. Written shortly after the anti-Rohingya riots in which at least 40 people were killed, the song talks about the destruction, and the video for the song was shot in the same town where the violence occurred in 2013.
Another artist who raises issues about socio-political problems through his craft is BK.
The young rapper from Tripura wrote in an email before coming to Ziro that he sings about issues of racism and politics and social problems because “I believe that through music we can bring about the necessary changes in society”.
One of the changes he hopes to bring about is in the people’s attitude about the northeast and its people.
On stage, before livening up the place with his immaculate flow, BK told audiences how he wasn’t fortunate enough to be born in a hospice or a hospital, and that he was born in the jungles of his home state where insurgency and communal rife has torn lives apart for decades.

BK raps about issues such as the marginalisation of tribals in his home state of Tripura and the everyday racism that people from Northeast face in mainland India.

“Music has the ability to change a person’s attitude. Music can touch lives and change lives. Music is a gift from god. So let’s use music to change lives,” he says.

Singer-songwriter Takar Nabam from Arunachal, who is currently based in Delhi, also later told me that music can bring people together and help heal the world.
Post his opening gig, legendary singer Guru Rewben Mashangva from the state of Manipur said that music “has the power to change the world if people sing about issues that matter”. 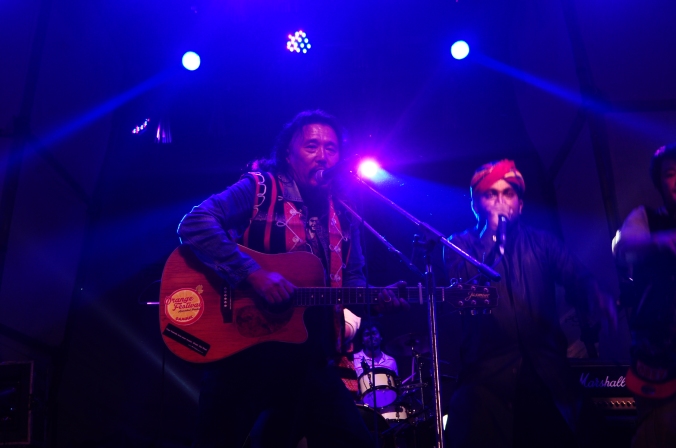 Rewben Mashangva (left), a Tangkhul Naga singer from the state of Manipur on stage with Rais Khan from Barmer Boys of Rajasthan from the west of country.

Mashngva is a staple in Ziro and is called the ‘King of Naga Folk Blues’. His unorthodox style of guitar playing combined with his gritty vocals have made him a festival favourite and inevitably draws comparisons with Bob Dylan. Little surprise that the legendary folk singer is one of Mashangva’s favourite singers.

Mercy, of the Tetseo Sisters, has a different take on the issue saying that they do not believe in musical activism “but admit that every song has a message”.

Kuku and Mercy from Nagaland’s Tetseo Sisters believe more in spreading joy with their music. And they look good doing it.

Based out of Nagaland and New Delhi, the Tetseo Sisters have performed across the globe at various cultural exchange events and have used their music to create awareness about voting rights and football earlier.
And while Mercy says that they do not believe in using music to stir controversies, she admits that “music is a powerful medium”.

Even the always jocular never-seems-to-be-serious Daniel Langthasa aka Mr India of Digital Suicide is positive that music can change the world.

Digital Suicide use their music to camouflage the seriousness of issues that they talk about.

Langthasa is based out of Haflong in Assam and has seen his place torn apart by underground violence – and that is reflected in the band’s music.

Their song #OPERATIONALLOUT acts like an outlet for anger and frustration over the presence and damages arising out of the numerous outfits in the region. The song begins with the acronyms of some of the larger separatist organisations.
The lyrics to most of their songs have no more than ten words played on loop, and his songs such as #AKHUNI that expose the hypocrisy of not talking about sex in the second most populated country in the world. Yet, a day after their performance, when I asked if music can change the world, he says, with his most serious face: Yes.

One thought on “Can music change the world?”